When we say we believe connected communities become thriving communities, sometimes the best opportunities are to connect with the well-connected. Recently, Alpine Communications was happy to have the chance to share the good work we’re doing with someone of influence: United States Senator Charles Grassley.

First, Chris Hopp, Alpine General Manager, gave Senator Grassley a private tour through Alpine’s central office which is the hub of connectivity for Alpine’s six exchanges in Clayton and Fayette counties. The discussion included a variety of topics: cybersecurity, Alpine’s role in preparing for natural disasters, over-the-top video, and telemedicine. Hopp and Grassley talked through broadband, the future direction of technology, and what Alpine would like to see to enable them to connect their communities. 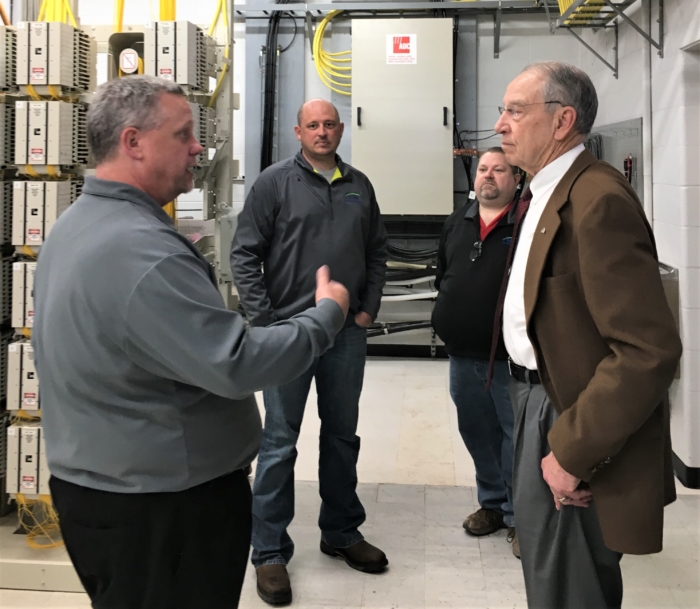 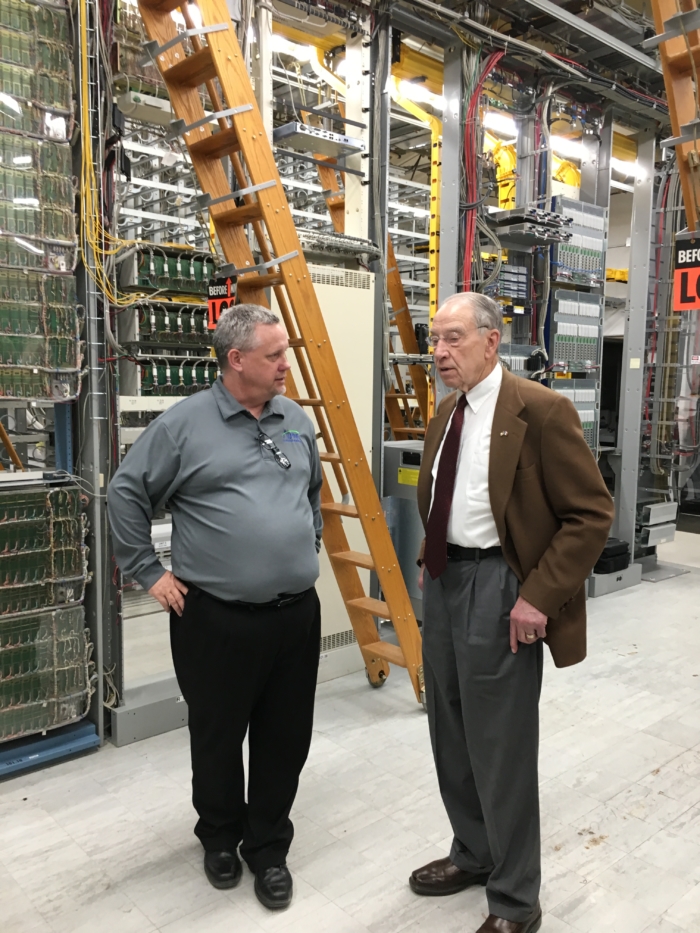 Next, Senator Grassley was received by more than 35 people including Alpine employees, community leaders, industry peers, and business representatives from across Alpine’s service area. 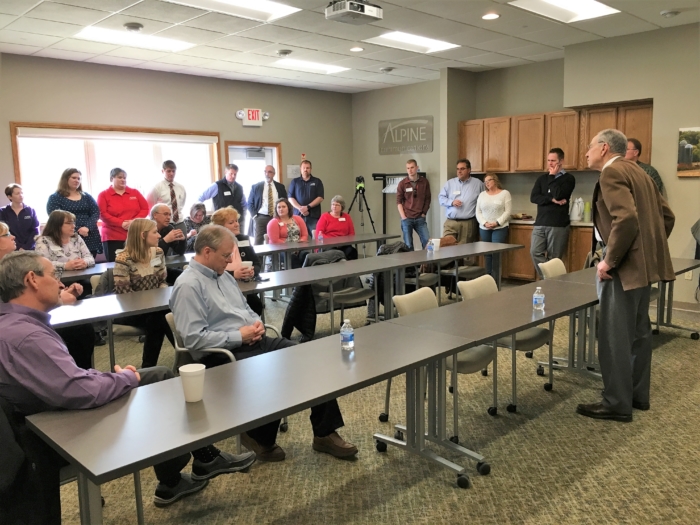 Senator Grassley began with a one-minute update on initiatives he’s involved with in Washington D.C.  As chairperson of the Senate Finance Committee, Grassley noted two important issues he is focused on in the short-term.  The first issue is getting any finalized trade agreements through the US House and Senate. The second issue Grassley is focused on is prescription drug prices which he hopes will lead to changes in other healthcare related items.  For example, Grassley wants to remove the mystery of healthcare costs for consumers. “We think that transparency brings accountability and we get the marketplace working to a better extent and get the prices down,” said Grassley.

Early in the open Q&A session, Kristie Austin asked Senator Grassley what the biggest thing we need to think about as Iowans. Grassley responded, “We need to brag more about Iowa. I think we are great in productivity and quality of our products and we don’t brag enough.  We have a much better educational system than what we talk about. I think it’s pretty nebulous to say this, but whatever we can do to strengthen the family. The family is the foundation of our society.” 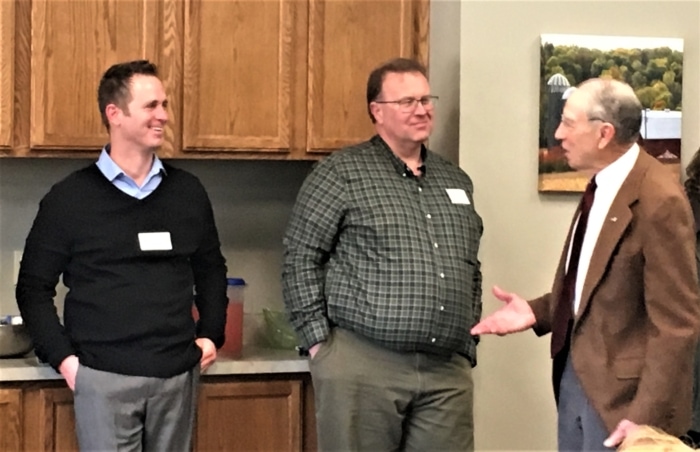 Next, Guttenberg Mayor Bill Frommelt asked about the possibility of bridges becoming part of the transportation infrastructure bill, specifically between Cassville and Guttenberg areas. Grassley spoke positively about getting an infrastructure bill passed in 2019.  “I can say from this standpoint that there is a great deal of talk about bipartisanship.” Grassley went on to explain there has already been a hearing before the House Ways and Means Committee to discuss ideas.

“Bridges and broadband. Broadband is always highly talked about as being part of it [infrastructure bill]. Now if there is money for roads and bridges it will come from Federal Government but probably left to the state to determine their priorities,” noted Grassley.

Midway through the session, Andy Reimer of Garnavillo asked Grassley, “Are things as bad in Washington D.C. as the media portrays it?” Grassley quickly answered, “No. They are bad but not that bad.” He continued to describe how bipartisanship is alive and well in Washington, despite media reports. “In the four years I chaired the Judiciary Committee, 61 bills got out of the committee and every one of them were bipartisan bills.  Forty-five got through to the United States Senate and 34 of them got to either a Republican or Democrat President and signed.  But you don’t read about that because we were working in a bipartisan way. It’s not as bad as what you think, but it could be better,” said Grassley.

Chris Hopp asked Grassley’s opinion on the future of privacy legislation or discussion in relationship to the new rules placed on broadband providers to certify/verify broadband speeds in the customers’ homes. “There is work being done in the Judiciary Committee and the Commerce Committee which deals with Twitter, Facebook, Google,” explained Grassley.  Discussion continued about opting-in or opting-out of terms and conditions for online platforms. 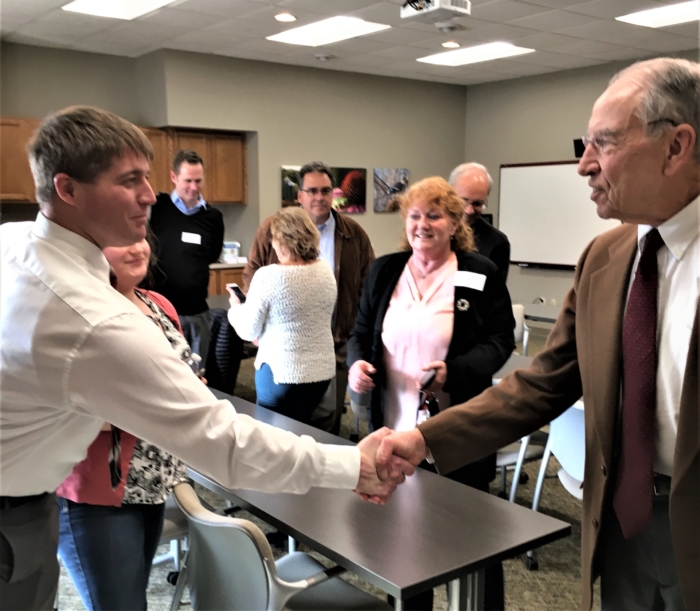 After 45 minutes, the Q&A session wrapped up with questions from Joe Tarton, co-owner of Fusion Products in Guttenberg, on the growing national debt and from Elkader Mayor Josh Pope about immigration. Senator Grassley thanked the group for their time and allowed time for handshakes and photos.

The face-to-face conversation is what Senator Grassley values about the town meetings in the 99 Iowa counties. Grassley encourages constituents to email him by completing the form at https://www.grassley.senate.gov/constituents/questions-and-comments when they can’t see him face-to-face.