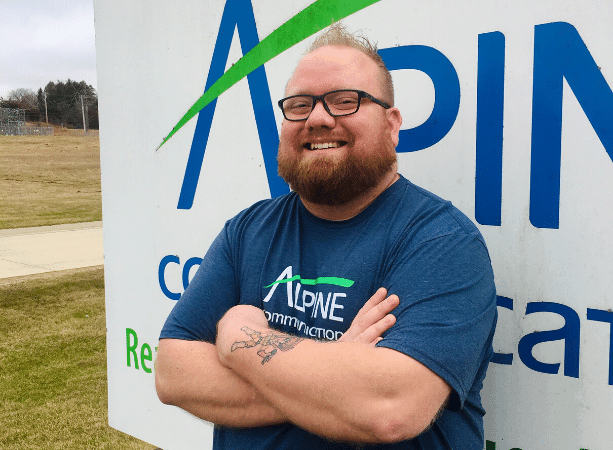 Alpine Communications is pleased to announce the promotion of Brody Gavin to Technology Manager, overseeing the IT operations. Brody joined the team as a broadband technician in September 2019 and subsequently moved into the IT department as a data network technician.  Brody brings more than nine years of telecommunications experience from Windstream, Maquoketa Valley REC, and Marne Elk Horn Telephone.  He received his Telecommunications Engineering Technology degree from Kirkwood Community College and is currently working on his CompTIA Network + certification.

Brody is a West Delaware graduate and returned to his hometown roots with his two daughters, Parker and Kinlee. He is a veteran of the United States Navy and earned the rank of Petty Officer Third Class, Fleet Marine Force Hospital Corpsman. In his spare time, he enjoys the outdoors, fishing, exploring the “forgotten towns” of Iowa, and playing guitar. One passion that runs in the family is the love of BBQ and cooking.

Brody’s outgoing nature adds positive energy to the office. He would contribute it to his superhero alter-ego moniker, Starboy. One thing most don’t know about Brody is that he has an interest in psychology and is fascinated by the psyche of serial killers. When asked about his tenure at Alpine so far, he responded with a nod to his love of music, “It’s a beautiful ride, by Dewey Cox.”